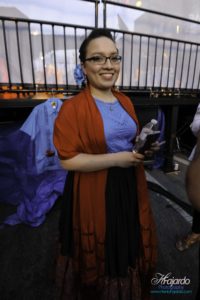 Eréndira Izguerra
Eréndira graduated from the University of Illinois in Chicago (UIC) with a degree in music. She studied classical violin with Jennifer Cappelli and joined the Orbert Davis’ Chicago Jazz Philharmonic playing both violin and baritone sax. While at UIC she also formed the student ensemble Mariachi Fuego, getting the school to approve it as a curricular activity. As an educator, Eréndira started teaching music in 2014, first as an assistant at James Monroe Elementary and then with the Chicago Mariachi Project, The Resurrection Project mariachi group at Orozco Middle School, and the Summer Camp and Strings Alive programs at the Chicago Jazz Philharmonic. She was invited to perform with Sones de Mexico Ensemble as a guest in 2016, and invited to join the Ensemble in 2017. In 2017, she won a Master-Apprentice award from the Illinois Arts Council Agency to study Mexican music with Sones de Mexico co-founder and ethnomusicologist Juan Díes. In 2017 she also won a Chicago Music Award for Best Latin Band along with the rest of Sones de Mexico Ensemble. 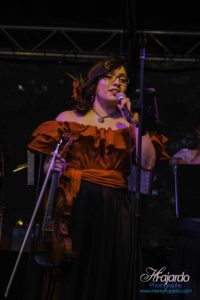