Beyond the Music: Solar Eclipse Concert

A rare total solar eclipse will pass directly over Carbondale, IL on the afternoon of August 21, so Sones de Mexico Ensemble is heading to the path of totality to present Beyond the Music: A Musical Geography of Mexico  outdoors at Lemus Turley Park, 109 N Glenview in Carbondale.

The total eclipse occurs at exactly 1:21PM. There will be music both before and after, starting with Zenen Zeferino from Veracruz, Mexico with the Encuentro de Jaraneros of the Midwest. After a break to view the eclipse, Sones de México will perform beginning at 2PM.

In addition to Beyond the Music, Sones de México will perform rarely heard selections from their 2013 concept album 13 B’ak’tun, a song cycle that revolved around the turning of the Mayan calendar.

Beyond the Music: A Musical Geography of Mexico is made possible with the support of the National Endowment for the Arts.

Check back with us for our Facebook Live Broadcast on August 21, 2017 1pm CDT 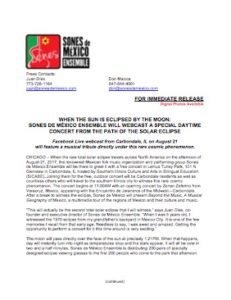