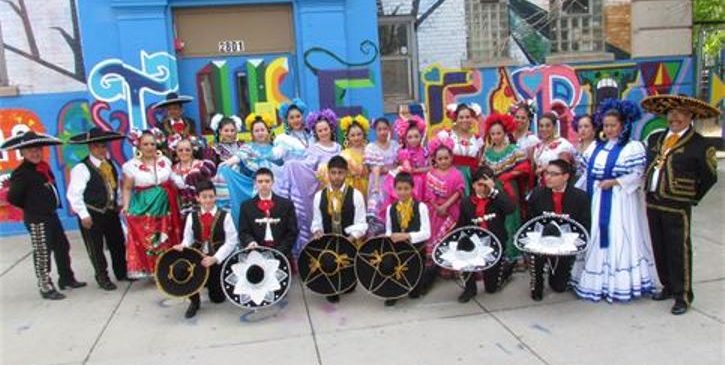 Ballet Folklórico Xochitl celebrates its 18th season with “Mexico de Mis Recuerdos”, a public performance in Chicago’s Little Village neighborhood. The show will feature 45 company dancers and a special guest appearance by the GRAMMY-nominated Sones de Mexico Ensemble. Our goal is to exhibit our rich and diverse Mexican Heritage through dances from all around […]

Sones de Mexico Ensemble celebrates Day of the Dead / Día de los Muertos with a day of activities for kids and adults at the Angel Mounds State Historic Site in Evansville, IN. All activities are free and open to the public. 11:00am: Danza del Sol Workshop 11:30am: Corrido Songwriting Workshop 1:30pm: Viejitos Mask Making […]

Presented by the Detroit Institute of Arts and the Mexican Consulate in Detroit in celebration of Mexican Independence Day. Director Sergei Eisenstein’s restored silent film masterpiece “¡Que Viva México!” with live musical accompaniment by Sones de México Ensemble. On a 1927 visit to the Soviet Union to celebrate the 10th anniversary of the Russian Revolution, […]

There may be a Chicago Style hot dog, but this fest presented by the Chicago History Museum will take in a wide range of preparations from 14 neighborhood stands across the city. Sones de Mexico Ensemble will take its place among bands from many neighborhoods as well, proudly representing Chicago’s Mexican community. The fest takes […]

The Galva Arts Council and the Levitt AMP Music Series present Sones de México Ensemble in a free, outdoor show for the whole family in beautiful Wiley Park in the center of Galva, Illinois. Also performing are the traditional Americana band Bone Jugs from Urbana, IL.

Sones de México Ensemble travels to the nation’s capital to celebrate Día de los Muertos at the Potomac Atrium of National Museum of the American Indian. The concert will also be webcast live at http://nmai.si.edu/explore/multimedia/webcasts/ This collaboration between the Smithsonian Latino Center and the National Museum of the American Indian celebrates Native ancestors and connect with living Native cultures. This program […]

Sones de Mexico Ensemble’s “Beyond the Music: A Musical Geography of Mexico” QUIZ: Where are Tapatíos, Jarochos, Regios, Chilangos, and Calentanos from? What is their music like, and how did it come to sound like that? Experience a guided tour through Mexico’s folk music regions with our lively and informative multimedia performance presentation. Find out […]